Today I’m writing from Costa Rica, where I’m enjoying the jungle luxury of The Sanctuary at Two Rivers co-teaching a retreat with Kapilnath of the International Nath Order.

A couple of weeks back I re-read one of my favorite books, Kinship With All Life by J. Allen Boone, who was working in the movie biz in Hollywood nearly a century back when friends requested him to look after Strongheart, their canine film sensation. What began for Boone as a simple favor soon metamorphosed, courtesy of his patient four-legged new friend, into an education in interspecies communication, inner listening, and receiving messages from Nature, all directed and taught by the dog himself. Fascinated by the new perspectives thus obtained, Boone expanded his kinship horizons well beyond the human standard – he even established a relationship with a housefly – all thanks to his willingness to open his inner eye:

“… our five organs of sense give us a kind of ‘feel’ of the universe and the various things that it contains, but they do not help us to experience things as they really are. Rather the sense organs distort the reality, as if we were trying to view and understand a beautiful landscape through a camera lens that is out of focus. The great spiritual explorers who have searched for the real facts behind all appearances have told us that the universe is faultless in its operation. But they have pointed out that the average human has difficulty in seeing and experiencing this real universe because of his defective inner vision and his disinclination to correct it.” (p.62) 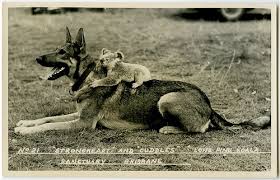 Boone maintained that every creature had something to say, and though he probably never visited India, had he done so he would have found many men and women there communing with all manner of multi-legged creatures; Vimalananda, for example, was close friends at various times in his life with dogs, a monkey, a crocodile, and even a cockroach. And you need not be a spiritual giant to establish your own connection with the world without; get out of the door, and get out and look all around, and you will find willing correspondents all about you. A recent Dutch study found that while people felt calmer when entering a public park, they felt “excitement, a sense of being overwhelmed, acute self-awareness, agitation, self-transcendence” in a wild environment, all things that bring us closer to Nature. The latter group also reported sharing the experience of contemplating their own death, a reality that we do well to contemplate and come to terms with before our actual demise.

While its harder than ever before to enter true wilderness because of the sheer number of humans on earth and the dwindling number of undisturbed places available, we should try to find ways to connect with nature so that we can rekindle the different ways of knowing that are dormant within us. Costa Rica, for example, well-known for its biodiversity, is absolutely full of flora and fauna that need little prompting to tell you what they know – if only you have the ear to hear what they have to say.  Try sending some respect and openness out into whatever nature surrounds you and see what you are offered in return.

Kinship With All Life is one of the several books on my “Recommended Reading List”, a non-comprehensive grouping of several of the books that I have read and enjoyed, that have “spoken” to me. I continue to add titles when inspired to do so, so check back from time to time if you are search of a good read …in the meanwhile please go chat with Nature!